Catching Big Fish from the Shore

Share
A common e-mail I receive from anglers is asking how they can catch a big fish off the shore. It’s a great question, but not so easy to answer!

The first thing we need to establish is exactly what do we term a big fish? Off the shore, then it’s my opinion, in the general scheme of things, that a 10lb plus fish is one to be proud of immaterial of species. Yes some lucky lads may be able to target common skate off the shore up in Scotland, big tope off the rocks in Wales and Cornwall, and huge conger eels inside Plymouth Sound. This is specialised fishing though, and not commonplace for anglers that just want to catch their first good fish.

So what species should we look at that might provide that double figure prize, and what areas are likely to produce?

At the moment, in most areas, you have one of the best chances of bagging a 10lb cod than has been available for many years. These fish have recently come from the Arbroath area in the east of Scotland, off the Northeast scars, from the Lowestoft and Felixstowe area, Dungeness, Chesil Beach, and both sides of the Bristol Channel. Tactics are simple, just fish big lug baits tipped with squid, or whole squid, maybe with a slice of bluey added and make sure these are anchored to the seabed. These fish will stay inshore until about the third week of January, later in some more northern areas, so you still have time.

How do you target a big fish?

East coast anglers have it tough regards big fish. Apart from the cod they can only really target a smoothound that gives them a decent chance of a double from May to July, or a thornback ray, though the latter these days are few and far between.

However there’s always the chance of a big bass in summer and autumn. So many east coast anglers seem to put their rods away in the summer, yet a concerted effort on some of the rougher beaches, and on the Holderness coast, would I’m sure produce a few bass doubles. Crab baits would be the best choice for both species.

The Hampshire coast in summer again sees the smoothound as the likeliest target, but big bass are also on the cards. One fish many might not think of would be the stingray from May through to July. Crab would be the main bait for all these, though the big bass might prefer a whole pout on a long flowing trace.

What Is The Best Bait To Fish With At Night?

These are best fished for at night with big fish baits of mackerel, squid and bluey, with the slack water periods and the first of the tide run often the best times. The rock ledges of Devon and especially Cornwall give you an excellent chance of a double figure conger. Huss are taken here too with fish to 14lbs not uncommon. These would fall to the same baits. Both the conger and huss could be termed year round targets in these waters. 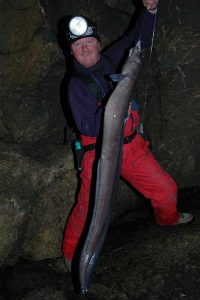 Some of the best opportunities lay in the Bristol Channel, both English and Welsh sides. You have the winter cod, but also big conger to 20lbs are taken right through the year. The ray fishing is also exceptional with thornback and small-eyed ray capable of breaking the double figure barrier and these are available from about April through to October. Another ray that can be caught from selected marks is the blonde ray, especially on the Welsh side well west of Cardiff.

This year has seen fish to 17lbs taken and past years fish to over 20lbs. These tend to show later in the year around October. Bass well in excess of 10lbs can also show from these same marks, especially in the autumn. Possibly the best bet though, is to target the smoothound in the Aberthaw area from June to August. This is one of the best patches for double figure smoothound in the whole of the UK.

Hose who fish west Wales need to go for the huss and conger off the rock ledges between Marloes and St David’s Head. These give the best chance of a 10lb plus fish with the huss showing best from April through to Christmas, and the conger available all year, but the biggest eels come out to play from September to the end of January. Mackerel, bluey and squid the top baits.

Mid Wales lacks double figure species. Your only chance would be a bass in summer or autumn, a huss from a rough ground beach, or maybe a small-eyed ray from somewhere like Borth between June and October. Not easy here!

North Wales offers a little more than many areas. The rock ledges give a near certainty of either a double figure conger or a huss. The best times are again in the autumn for both species, though good huss can also show in April and May. A few double figure thornbacks are caught from the deeper beaches in June, and from the rock ledges in January/early February.These rock marks can also throw up a less common catch such as a blonde ray in the autumn, also the odd small-eyed ray that might top 10lbs.

One potential species anglers rarely give thought to are pollack. Big pollack smash anglers up using standard spinning gear loads of time every year on these marks. If you want to try for one of these, then fish a bass rod or very heavy spinning rod with 30lb braid and set your drag high to apply as much pressure as possible. The last area here would be inside the Menai Straits. Very occasionally a 10lb cod is caught here as occurred in 2021, but your primary targets are conger fishing between the bridges, and big bass from June to November. 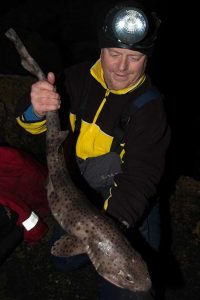 If you fish The Mersey, then it’s not so easy nowadays, but logical targets would be smoothound in June and July and cod from October through to January. A thornback or big bass are possible, but way less easy to deliberately aim for here. Maybe not a popular thing to say, but the area north of The Mersey up through Cumbria is tough. It would have to be a bass or a cod, and not many of these get reported.

The west coast of Scotland adds a couple of new species, ling and spurdog. Fishing fish baits will take both these with the early year period and autumn, depending on the region, good for the spurs, with double figure ling possible from September through to February, but you need deep water generally for both. The other easier species to go for are our old friends the conger and the huss. These tend to be more prominent in the September to early New Year period.

Also bear in mind that the conger and huss are somewhat territorial, so treat them carefully when photographing them and get them back in the water as fast as possible. Within their season this can also apply to the thornbacks, small-eyed and blonde ray.

Bream Fishing And At Last A Double Figure Fish

The above then is not a definitive list, but a guide to the species within general areas that give you the chance of taking double figure fish either for the first time, or on a regular basis. Searching out big fish is a real adventure and the rewards are there, providing you put the time in on the right species in the appropriate places with the most effective baits.

Please Add a comment before the calling of Catching Big Fish, we will inform your mail address to the owner of the fish. They will reach to you from email or your phone.
Post Views: 123

The Role of Color in Fishing